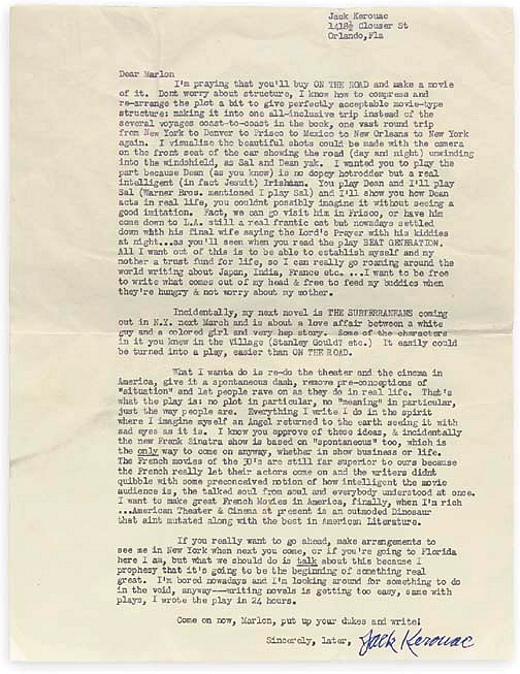 I’m praying that you’ll buy ON THE ROAD and make a movie of it. Don’t worry about the structure, I know to compress and re-arrange the plot a bit to give perfectly acceptable movie-type structure: making it into one all-inclusive trip instead of the several voyages coast-to-coast in the book, one vast round trip from New York to Denver to Frisco to Mexico to New Orleans to New York again. I visualise the beautiful shots could be made with the camera on the front seat of the car showing the road (day and night) unwinding into the windshield, as Sal and Dean yak. I wanted you to play the part because Dean (as you know) is no dopey hotrodder but a real intelligent (in fact Jesuit) Irishman. You play Dean and I’ll play Sal (Warner Bros. mentioned I play Sal) and I’ll show you how Dean acts in real life, you couldn’t possibly imagine it without seeing a good imitation. Fact, we can go visit him in Frisco, or have him come down to L.A. still a real frantic cat but nowadays settled down with his final wife saying the Lord’s Prayer with his kiddies at night…as you’ll seen when you read the play BEAT GENERATION. All I want out of this is to able to establish myself and my mother a trust fund for life, so I can really go roaming around the world writing about Japan, India, France etc. …I want to be free to write what comes out of my head & free to feed my buddies when they’re hungry & not worry about my mother.

Incidentally, my next novel is THE SUBTERRANEANS coming out in N.Y. next March and is about a love affair between a white guy and a colored girl and very hep story. Some of the characters in it you know in the village (Stanley Gould etc.) It easily could be turned into a play, easier than ON THE ROAD.

What I wanta do is re-do the theater and the cinema in America, give it a spontaneous dash, remove pre-conceptions of “situation” and let people rave on as they do in real life. That’s what the play is: no plot in particular, no “meaning” in particular, just the way people are. Everything I write I do in the spirit where I imagine myself an Angel returned to the earth seeing it with sad eyes as it is. I know you approve of these ideas, & incidentally the new Frank Sinatra show is based on “spontaneous” too, which is the only way to come on anyway, whether in show business or life. The French movies of the 30′s are still far superior to ours because the French really let their actors come on and the writers didn’t quibble with some preconceived notion of how intelligent the movie audience is, the talked soul from soul and everybody understood at once. I want to make great French Movies in America, finally, when I’m rich…American Theater & Cinema at present is an outmoded Dinosaur that ain’t mutated along with the best in American Literature

If you really want to go ahead, make arrangements to see me in New York when you next come, or if you’re going to Florida here I am, but what we should do is talk about this because I prophesy that it’s going to be the beginning of something real great. I’m bored nowadays and I’m looking around for something to do in the void, anyway—writing novels is getting too easy, same with plays, I wrote the play in 24 hours.

Come on now Marlon, put up your dukes and write!